I used to get so frustrated with history. Names and dates. Ugh. Memorize them and get an A, but if you got bored and missed something, you could flunk a test.

I really had to keep this in mind when I started digging into the history of my little town of New Bern. Let’s consider the Masonic Theatre, for instance, since that’s where Jessica’s first adventure takes place.

Here are the facts:

But if you read between the lines, you can see there were some interesting stories going on. For instance, though the Theatre and Lodge were begun in 1802, the Masons had been meeting in New Bern for years before. And why did it take so long to complete? Because, being Masons, they did the work themselves. So this wonderful building, which is now more that two centuries old, was a labor of love.

The duel between John Stanly and Richard Dobbs Spaight is a whole other story, and very interesting, involving multiple letters to the editor in which the two took repeated jabs at each other, both politically and personally. I imagine if it happened today, what with Twitter and Facebook, the result would have been much faster and possibly more violent, but probably have ended up the same way with death for one and disgrace for the other.

It’s more difficult to call the Masonic Theatre the oldest surviving theater than you’d think. A theater in Pennsylvania, which was built in 1809 actually claims that title, as best I can tell, although the Masonic Theatre is at least four years old. Its history is complicated, though. During the Civil War, it was used as a Confederate Armory and a Union hospital. It was a motion picture theater from 1917 to 1974, when it closed down and was only restored and reopened in 2002, home to Rivertowne Players.

What is it that makes this theater so special? A little magic, maybe. Maybe its complicated history has given it more character than most others. If it’s haunted, it’s certainly by benevolent ghosts, though, and reading between the lines of its history is why I chose it to serve as the setting for Jessica’s first mystery.

Speaking of the theater, Jess Cee and I are looking to add a bit to its history at the end of this month! We’ll have our Jessica Entirely Launch Party there June 30 from 2-5 p.m., so if you’re in New Bern, stop by to say hey and join the fun. We’ll have light refreshments, a DJ, games, karaoke, and a reading of the first chapter of Jessica Entirely.

I am an author of romance, poetry, children's books and graphic novels. I also own a bookstore. My love of the written word runs deep. View all posts by Michelle Garren Flye 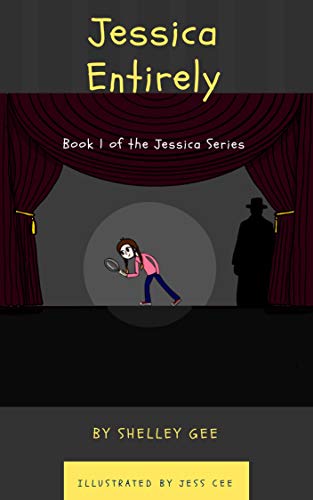 Eight-year-old Jessica has just survived her first hurricane. As she and her family work to help friends and neighbors recover from the lasting effects of the storm, Jessica makes a mysterious discovery in the gardens of Tryon Palace. Black tulips begin to bloom. They’re out of season, and many believe they’re a bad omen. Can Jessica solve the mystery of the black tulips in time to save Tryon Palace’s annual Candlelight Tour?

A mysterious stranger walks into a haunted Masonic theater in a 300-year-old city. But why? Eight-year-old Jessica is entirely dedicated to finding out, especially when she suspects it involves treasure! Join Jessica and friends as they dive into the history and mystery of New Bern, North Carolina.